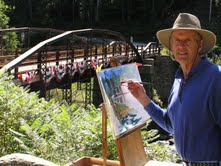 “Applying paint to paper is both challenging and exciting,” explains Tom.  According to Dee Sarno, former Executive Director of the Saratog County Arts Council in Saratoga Springs, New York, “Tom has obviously captured these feelings through his art.  His vivid watercolors have been recognized with awards in numerous juried shows and are in many corporate and private collections.”

I live near The Adirondacks and enjoy the great natural beauty and historical significance of upstate New York. The Adirondacks are unsurpassed for artistic inspiration, particularly the lakes, the rivers, the atmospheric effects of light, fog, rain, and mist, or a snowy landscape.  I find watercolor the ideal medium to capture these shifting moods.

I have painted for many years and participated in many exhibitions throughout northeast NY and Vermont, lectured, demonstrated watercolor painting, and judged art competitions.  I have taught beginning and intermediate watercolor classes at the Saratoga Arts Center for more than fifteen years and have led numerous watercolor workshops in the Eastern New York State Region.  I am past president of the Upper Hudson Valley Watercolor Society, Glens Falls, New York; and currrent Co-Leader with Sue Beadle of Plein Air Adirondack.

I have received numerous awards for my watercolors including being juried into the highly competitive 2009, 2010, 2011, 2012, 2013,  2014, and 2015  North East Watercolor Society Annual International Exhibitions and 25th Annual Adirondacks National Exhibition of American Watercolors at The Art Center, Old Forge, New York.  In 2011, I was awarded signature membership in the North East Watercolor Society. In 2000, I received an individual artist grant from the Saratoga County Arts, for a project involving the historic Bow Bridge in Hadley, New York.  One of the outcomes of this grant was a published book I compiled “The Art and History of the Bow Bridge” that includes my own art as well as that of several other individuals.